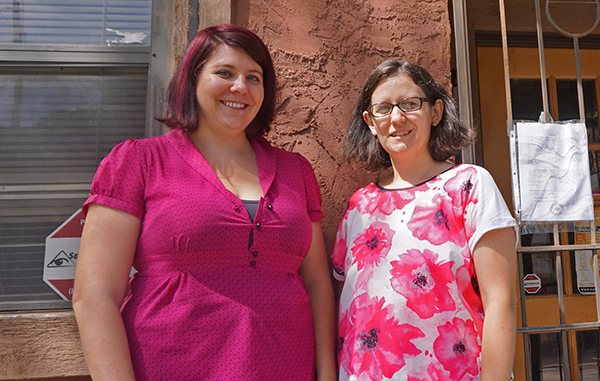 Julia Monahan (left) and Nicole Skorka set up Sunnyside, then a new co-working space, in 2015. Photo by George Demopoulos.

Nicole Skorka has worn many hats running a coworking space in North Denver for three years.

The 33-year-old mother of three installed bathroom floors herself, hosted the annual neighborhood chili cook off and even broke up a brawl between two tenants.

But the many demands of running a coworking spot have taken their toll. Come Aug. 1, Skorka is closing the 3,000-square-foot coworking business at 4047 Tejon St.

“If you want to run a payroll and still earn money, you have to have a minimum 9,000 square feet to make that work and primarily private offices,” she said. “That’s how you generate money.”

Skorka, a digital marketer by trade, has been running her own company while also managing 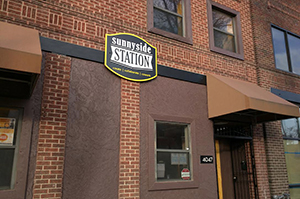 Sunnyside Station, a coworking space in North Denver, is closing at the end of this month. .

Sunnyside Station. While Skorka said Sunnyside was profitable, but she couldn’t afford to hire anyone to help her manage the business.

“If you want to have that employee structure, you have to own the building,” Skorka said. “If you’re leasing, there’s no way.”

The transient nature of independent tenants also hurt Skorka’s business. One month she would have 35 members, then fall to 25. “When you are a smaller space, that hurts a lot more,” she said.

Skorka moved to Denver in 2002 and opened Sunnyside Station in 2015 after not being able to find office space for her company, Nico Associates. She distributed surveys among Sunnyside neighbors, garnering responses from 60 people saying they wanted shared office space in North Denver.

“When we started, there were 12, maybe 15 coworking spots over town and they were locally owned and smaller,” Skorka said.

After launching a crowdfunding campaign that raised $14,000, Skorka opened Sunnyside Station near an old trolley stop in less than six months. Customers pay up to $2,250 per month for a private office and $350 per month for a dedicated desk.

In the beginning, she had help from a coworker and another business partner to manage and open the space. Since then, both partners have left Sunnyside for other opportunities, leaving Skorka to run the business alone.

“The doors are open, but I’m not able to be there every day,” Skorka said. “I have kids and another business. I want to be Wonder Woman, but I can’t all the time.”

With her lease ending this month, Skorka first tried to sell her coworking business, but declined offers from interested buyers. Within a month, she also lost 10 members, dropping to 22.

“I know if I were to hang on, the wave would come back up, but I just don’t have the bandwidth,” Skorka said. “I was part of an awesome community. I was able to pay our bills, so there’s success in that.”

Skorka declined to disclose her revenue last year. She said property taxes on her Sunnyside space have increased from $8,800 to $14,000 per year since Skorka opened Sunnyside Station.
Skorka’s landlord is Philip Fiore of Karleo’s LLC. The property’s broker is Bob Bramble with Antonoff & Co.