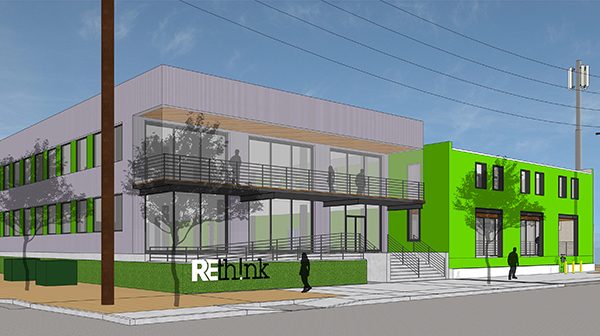 A new coworking brand targeting the real estate industry is coming to RiNo.

Rethink — or, as the company puts it, REth!nk — purchased the 16,371-square-foot building at 3950 Wynkoop St. earlier this month for $2.95 million, according to property records.

The company hopes to open it as a coworking space in the spring, said founder Ken Cope, targeting anyone with a foothold in the real estate world – from asset managers to architects, general contractors to brokers.

Cope said he’s worked in real estate in Denver the past 13 years, for AIMCO and Real Capital Solutions and most recently Sagebrush Companies. He left his position as chief investment officer for Sagebrush in October to start Rethink.

“While there are certain physical characteristics such as large-format printers, digital mapping services and access to real estate-specific trade information that cater to our members, we feel the real value is in the networking and programming,” he said.

Rethink announced earlier this month that it had closed on an $8 million round of funding. Cope said one investor is Houston-based Redevelopment Capital Partners.

“The fact that I’m based in Denver and Redevelopment Capital Partners is based in Houston gave us great comfort in the specific locations we’re buying and allow us to focus a lot of attention on these first two locations,” Cope said.

The 3950 Wynkoop St. building sits on a 0.32-acre lot and dates to 1944. Rethink purchased the property from 3950 Wynkoop LLC, which bought it for $477,500 in August 2004, according to records. Steve Serenyi and Tyler Ryon of Colliers International represented the seller.

Cope said the proximity to the light rail station at 38th and Blake streets was a major selling point.

The building was originally used by Doran Nut Sales, which distributed bulk foods in the western United States in the 1950s, Cope said. It was most recently home to Bella Glass Studios.

Rethink will renovate about two-thirds of the existing building, then demolish the remainder and add on to the site, ultimately creating an approximately 25,000-square-foot, two-story structure.

Corgan is the architect on the project. Cope said a general contractor will be chosen in the coming weeks.

Rethink’s Houston location will be at 1512 Center St., just north of downtown. The 33,374-square-foot building was listed for sale at $3.95 million, according to the Houston Business Journal.

In addition to the two sites in the works, Cope said Rethink is “actively looking for locations in quite a few large U.S. markets.” The company wants to own, not lease, its real estate.