Future of Work Industry News - Hybrid Workplace > Business > The Who, Where, and Why of Moving for a New Job

The Who, Where, and Why of Moving for a New Job

As cities compete for Amazon’s second headquarters, many flexed their tax incentive packages and real estate options in hopes of luring the tech giant to select their city. It’s tempting to think the right financial perks is all it takes for a company to successfully expand to a new city. In fact, success requires a solid base of nearby talent — or the ability to entice skilled workers to relocate for new job opportunities.

The reality is that most job seekers don’t want to move. Most apply to jobs close to home, with government data showing the urge to move is only declining. So when a company opens a new location, it must expect to draw mostly from the local labor force. In a time when unemployment is near historic lows amid one of the longest economic expansions in history, finding the right talent is harder than ever. The right recruiting strategies are crucial.

Who are the job seekers more willing to move? In a recent Glassdoor study, I analyzed a large sample of more than 668,000 online job applications during a typical week to identify why certain job seekers are more willing to relocate and what motivates them to move. As a job and recruiting site, Glassdoor has a unique vantage into these near real-time migration trends happening among job seekers today, with nearly 40 million reviews and insights on workplace factors at more than 770,000 companies around the world.

Among the findings, three key factors emerged that can help companies rethink how they look at talent nearby and more successfully attract skilled workers from farther away. 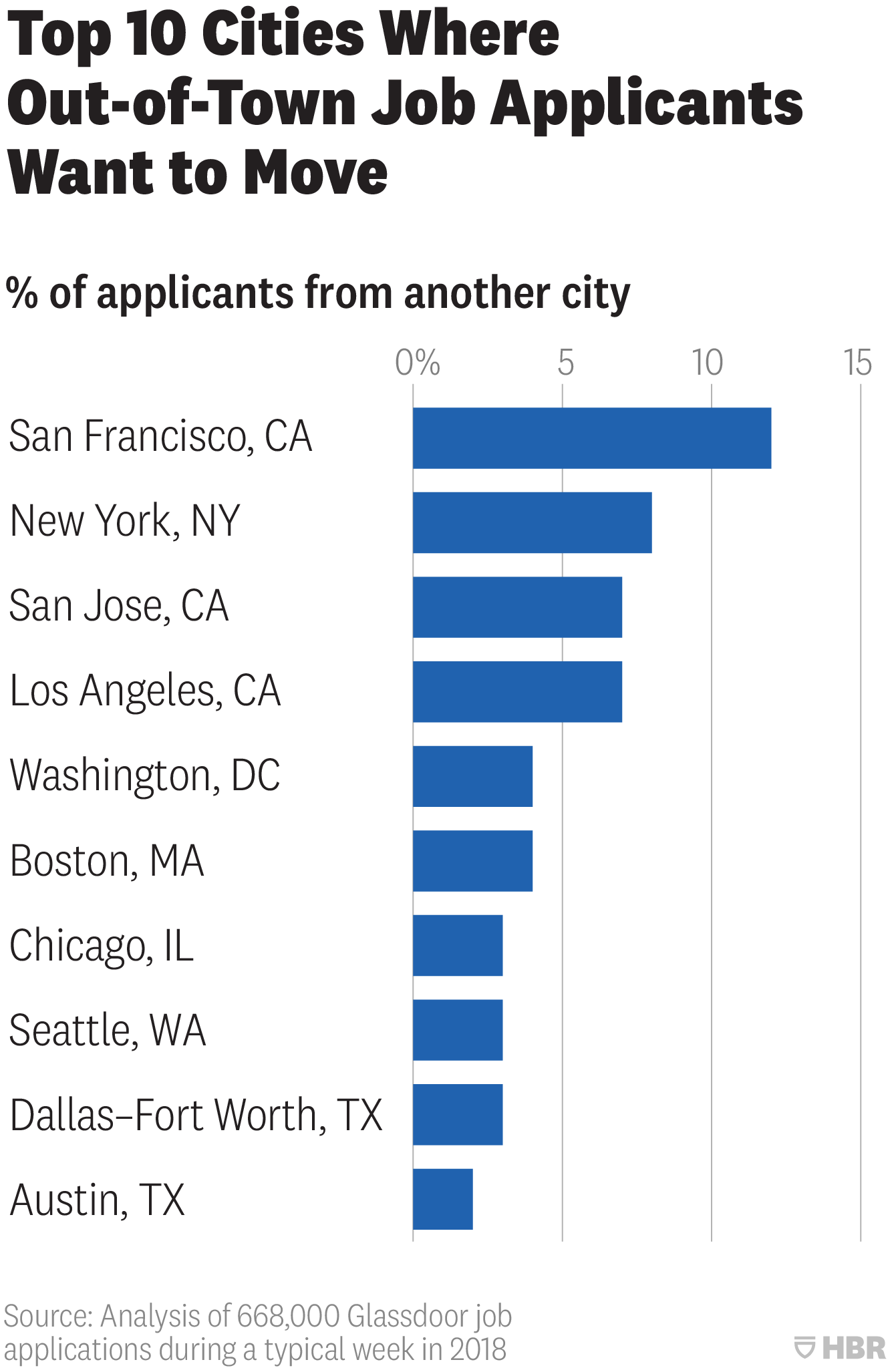 For starters, where a company chooses to locate will largely determine who applies for its open jobs. In practice, most job candidates will be found in the company’s own backyard. My research found 71.5% of job applications started on Glassdoor were to job openings within a candidate’s own metro area.

That simple lesson — that most applicants will come from the local labor market — is critical for companies who are considering relocating, opening a new office or expecting to hire a significant number of skilled workers who aren’t already in the area. Talent in today’s tech-driven economy is the most important asset for most companies; employers will have a much easier time filling open roles if they’re willing to move to where the qualified candidates are. The data show companies should not assume large numbers of workers will be willing to pack their bags to follow an employer to the city that offers the best tax incentives.

On the other hand, my study did find that some job seekers are much more willing to move than others — and among the most mobile are highly paid tech and engineering candidates. For that reason, tech-dominated metros like San Francisco, New York, and San Jose, CA, were top destinations for today’s job movers in our study. However, lower-paid workers in manual labor and service industries are much less likely to apply to jobs elsewhere. Our study shows roles like bartender, truck driver, and retail worker rarely attract candidates from outside metros. For employers hiring on-the-ground roles like these, it is a major challenge to hire from outside the local labor market. 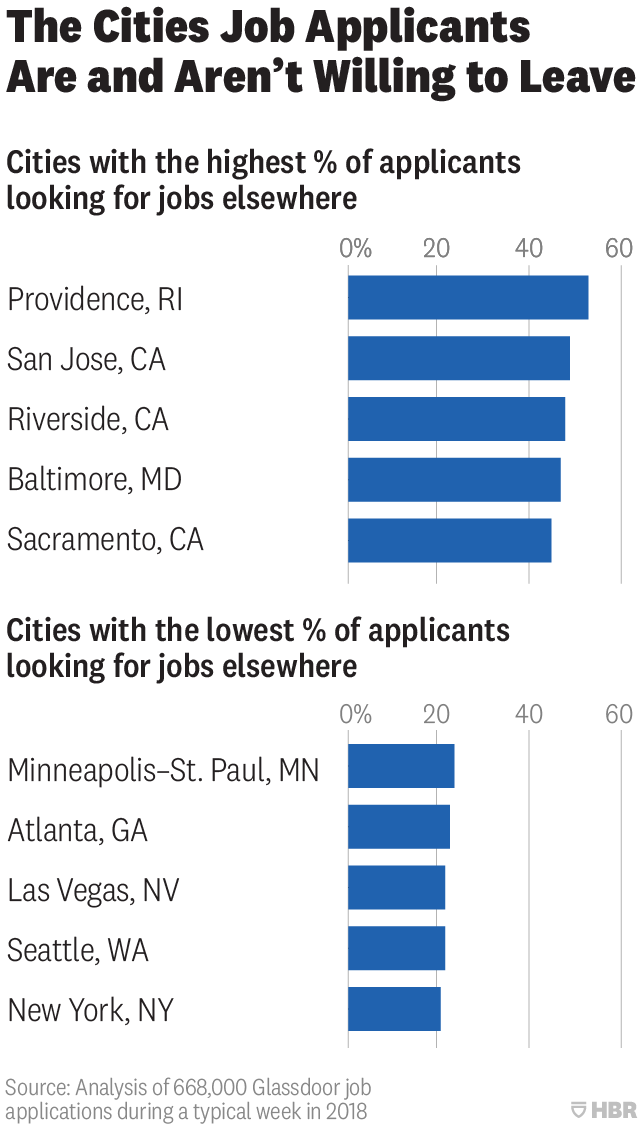 What does attract candidates to move for jobs? As the saying goes, money talks — and that also applies to enticing candidates to pick up and move for jobs. My study found an extra $10,000 higher base salary predicts candidates are about a half percentage point more likely to be applying to a job outside their home metro.

But what may surprise many employers is that higher pay actually matters much less than having a desirable workplace culture. We found having a one-star-higher overall company rating on Glassdoor (on a 1-5 scale) had six times as large an impact on the odds of attracting job applicants from outside metros as did paying $10,000 more in salary.

What does “good company culture” mean? Typically, it doesn’t mean free lunch or ping pong tables. Instead, our research over the years has found it means having learning and career growth opportunities for employees, establishing clear company values and a mission that connects with a larger social good, and having high-quality senior leadership. Those are the key statistical drivers of overall company ratings on Glassdoor — and those are the factors that can in turn help companies attract talent from outside metros.

In practice, companies can attempt to offer more pay and compensation to offset mediocre workplace culture. But this research suggests it may mean offering significantly higher salaries. In this way, making consistent steps toward fostering a positive workplace environment that takes employee well-being seriously can pay off financially for employers — and improve efforts to recruit candidates from around the country.

A final lesson from the study is that relying heavily on job seekers willing to relocate can impact the diversity of applicant pools in unexpected ways. The study found men are by far more willing to move for jobs. Even after I controlled for job titles, education, and age, men were about 3.3 percentage points more likely to be applying to a job in another metro compared to women.

I also found that older, more experienced workers are significantly less likely to apply to jobs outside their home metro — likely the result of higher homeownership rates and deeper family roots among more experienced candidates, making them less willing to move for jobs.

This means that companies who choose a location strategy based on the assumption that they will mostly recruit from outside the metro area will likely face a candidate pool for open jobs that is deficient in important ways: with fewer female applicants and fewer older workers further along in their careers. If employers want a diverse candidate pool, they will likely need to make a conscious outreach effort when it comes to applicants from outside metros. This is especially true for employers in industries with higher rates of mobile workers, including today’s fast-growing tech and engineering fields with disproportionately high rates of young, male job candidates.

Today’s workforce and skill landscape are changing rapidly, with jobs increasingly adapting to more “tech”-style roles that untether workers from their desks, allowing them to be more mobile than ever. However, the forces of geography still play an important role in today’s economy, and the fact remains in our data that most job seekers today still want to stay where they are. Companies who can best leverage nearby talent, or who know how to deploy the tools of premium pay or superior workplace culture to attract candidates from afar, are more likely to come out ahead.