Is digital technology a democratizing force, allowing smaller, newer companies to compete against giant ones? Or does it provide even greater advantage to incumbents? That question has gotten a lot of attention lately, in response to data showing that the rate of new business creation in the U.S. has slowed, and that in most industries the biggest firms have higher market share than they did a decade ago.

Despite those trends, our research suggests that technology can in fact provide an advantage to small and new firms. In recent research, we studied the adoption of cloud computing across U.S. businesses. Cloud computing is an IT paradigm based on remote access to a shared pool of computing resources. Putting data “in the cloud” essentially means paying someone else to manage it, and then connecting to their servers via the internet to access your data when you need it. It also means you don’t need to analyze these data on your own machines, but you can “rent” them on demand. The popularity of cloud computing has exploded during the last half a decade. By cutting the fixed costs of computing — avoiding the need to hire IT staff, servers, and hardware —  even the smallest firm can satisfy large and unexpected computing needs.

For example, KenSci is a small Seattle-based healthcare analytics company, which uses machine learning techniques to analyze hundreds of variables about patients’ conditions to provide real-time predictions about mortality, readmissions, and other health-related risks. Relying on the cloud, KenSci has been able to quickly scale up and offer its services worldwide, without building a sizeable IT-infrastructure beforehand. The computational agility of cloud computing has been playing a role in manufacturing as well, fostering the creation of new “smart’” products. Pivothead is a firm with 25 employees producing wearable technologies to help the blind and visually impaired. Information collected by the wearable sensors are sent to the cloud, processed through machine learning algorithms, and transformed into speech or text, in order to help the client navigate the surrounding environment.

These anecdotes suggest that cloud computing has “democratized computing” by bringing it to the masses of firms. Our research confirms this intuition using a massive new dataset of over 1 million U.S. firms since the 1980s. Specifically, we found three key results. First, cloud computing has seen massive growth. Less than 0.5% of firms had adopted it in 2010, whereas 7% had by 2016, which is an annualized growth rate of almost 50%. Second, the adoption of cloud computing has occurred across the U.S., not just in one region — albeit with heaviest and earliest adoption in urban and educated areas. But third, and most strikingly, cloud computing — unlike other technologies like PCs and e-commerce — has been adopted first by smaller and younger firms.

The dataset for our analysis comes from Aberdeen Information’s call center which has been making annual phone calls to millions of firms across the U.S. since the 1980s. They painstakingly record the hardware and software used by millions of firms per year back to 1981. This dataset is often used by academic researchers because of its broad coverage and data quality. Surveys aren’t perfect, of course, and one disadvantage of this data is that respondents have discretion over what they consider to count as cloud computing. (Although many internet services these days involve accessing your data from another company over the internet, for the purposes of this survey we expect that firms are responding to a narrower use case: the use of specific enterprise cloud-hosting services such as AWS, Microsoft Azure, Google Cloud Platform, IBM Cloud, Oracle, or Alibaba.)  In this paper we use the records from more than 150,000 U.S. firms with information on their adoption of cloud computing.

The Adoption of Cloud Technology Across Industries in the U.S.

The chart below shows the rise of cloud computing since 2010, the first year the database started recording this. We see cloud adoption rates rising from 0.3% in 2010 to 7% in 2016, which is a more than doubling every other year. Moreover, this rise has occurred in every broad industry group we studied, highlighting how the increase in cloud computing has spanned the U.S. economy. 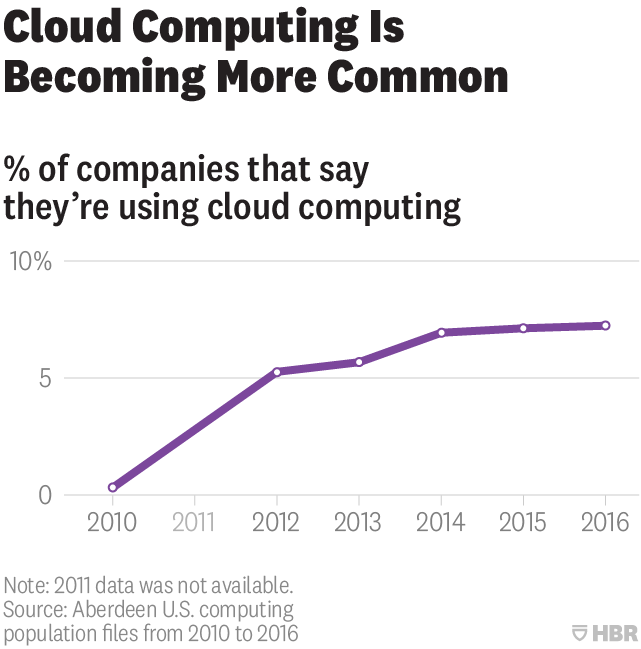 Our research also shows the geographic spread of cloud computing, showing a broad adoption across U.S. counties. This is not just a technology used by hipster startups in New York and San Francisco — it’s being adopted all across the country. Every U.S. county we have data on has seen an increase in cloud computing since 2010. 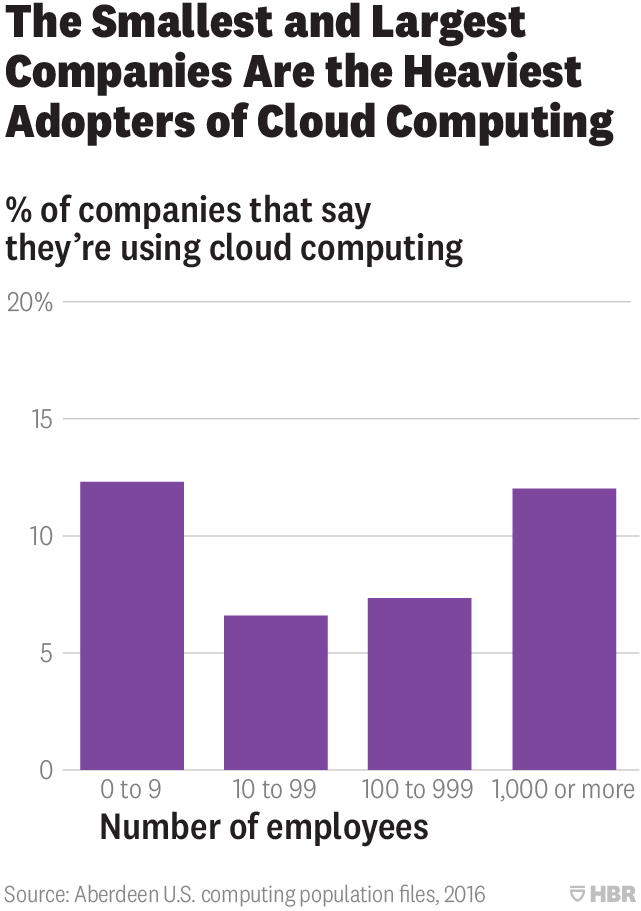 This cloud “tick” also turns out to be surprisingly robust. We see this across industries, firm types, and years in our data. Small firms really do seem to be the pioneers of cloud-computing adoption.

For contrast, we compared the adoption of cloud computing to adoption rates for two other technologies: personal computers (PCs) and e-commerce. These show the more classic pattern of greater adoption by large firms. Cloud really does stand out as being particularly attractive to the very smallest firms.

But it’s not just small firms driving the adoption of cloud computing. Young firms are adopting cloud computing faster than older ones. So, the most nimble, youthful, and entrepreneurial companies are the pioneers of adoption. Again, we did not see that with other technologies — older firms tended to be the first adopters of PCs and e-commerce. 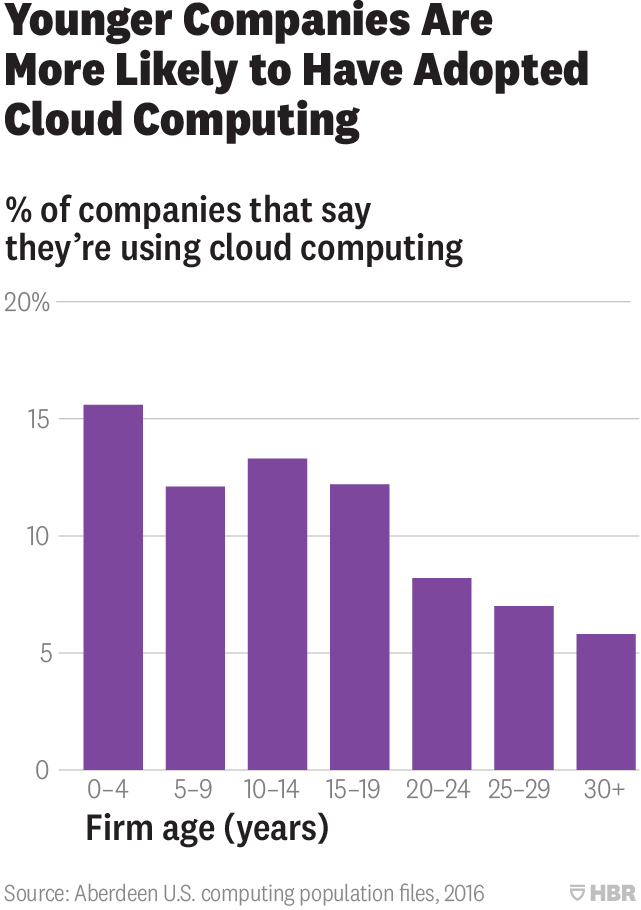 All of this suggests that cloud computing is an unusual technology that appeals to smaller, younger firms. We believe its ability to provide high-powered computing without the overhead costs associated with in-house software and hardware provision has driven this. In this sense cloud computing has spread computing out to the masses, democratizing computing.

Flexible access to computing resources allows small firms to scale-up (or down) rapidly and to experiment with new products and features. This operational agility can be particularly valuable when facing uncertain demand or a fast-evolving competitive environment. Recent evidence from Kristina McElheran and Wang Jin shows that the ability of “renting” IT resources has also aided young firms to survive and increase productivity.

These are encouraging findings, especially in light of the decline in business dynamism and the rate of new startup creation documented by John Haltiwanger and his colleagues. Although we don’t have data on how cloud computing affects firm performance, it’s not hard to imagine that lowering computing costs would substantially improve younger and smaller companies’ chances. Despite statistics suggesting a decline in U.S. dynamism, technology has been known to disrupt incumbents when they least expect it. Cloud computing may ultimately prove to be one of those disruptive forces.

(We thank Toulouse Network for Information Technology for funding for the data.)