A Centennial-based coworking company and business incubator whose CEO resigned in late May following allegations of sexual assault has ceased operations.

A tenant of Innovation Pavilion’s coworking space at 9200 E. Mineral Ave. told BusinessDen this week that he’s now paying his rent directly to the building owner instead of IP, which had been leasing the first floor. And Kitty Kolding, who briefly led IP following the sexual assault allegations, said Tuesday that she left the company in August, along with other staff members.

“I think all the employees stepped down right about that time,” Kolding said. “There were just a small handful by then.”

IP’s future had been in question since May, when two former employees accused then-CEO Vic Ahmed of sexual harassment and assault. Ahmed resigned a day after the allegations were first reported by BusinessDen. 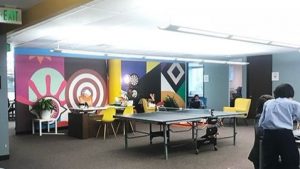 Northstar is looking for another coworking company to take over IP’s lease. (Kate Tracy)

Building owner Northstar Commercial Partners then put the company’s space up for lease, despite the fact that IP was still using it.

When a reporter visited the IP floor on Tuesday, signage for the company was still present and only one person was working, at a desk in IP’s common area. The woman said she believes Northstar is looking for another coworking company to take over IP’s lease.

Another IP tenant, reached by phone, said he had been paying the company $150 a month, but in September began paying the same amount to Northstar for continued access to the coworking space.

Nick Boshinski, who manages the building for Northstar, declined to comment. Northstar CEO Brian Watson did not respond to requests for comment.

Kolding declined to detail why she stepped down as CEO in August, less than two months after assuming the role in the wake of Ahmed’s resignation.

“There was a lot going on,” she said. “It was a bit of a confluence of factors that I didn’t think were in my best interest to remain.”

Speaking of the allegations against Ahmed, Kolding said, “Obviously that was a huge blow to the company.”

“Vic was driving the business for years,” she said. “I think there were a lot of factors to the business contracting the way it did.”

Ahmed did not respond to a request for comment this week. He founded IP in 2011, envisioning it as a campus where startups would work and attend IP-led events. In recent years, Ahmed spoke with multiple cities around the country about additional IP campuses, none of which came to fruition.

Last month, city leaders in Joliet, Illinois, repealed a 2017 agreement with IP, in which the city had agreed to give the company $200,000 and land for an entrepreneurial campus complete with dorms, according to local newspaper The Herald-News. The resources were to be given to IP when it applied for building permits, but the company never did.

The Herald-News reported that the departure of both Ahmed and Kolding prompted the decision.

Mari Newman, an attorney with Kilmer, Lane and Newman, is representing Suzy Gutierrez, a former IP employee who filed a lawsuit against Ahmed, accusing him of sexual assault. Newman said a trial is set for January, but that date is subject to change. She said no lawyer currently represents Ahmed or Innovation Pavilion.

Does your business have a plan for the future of work?

What Are The Top 10 Soft Skills For The Future Of...