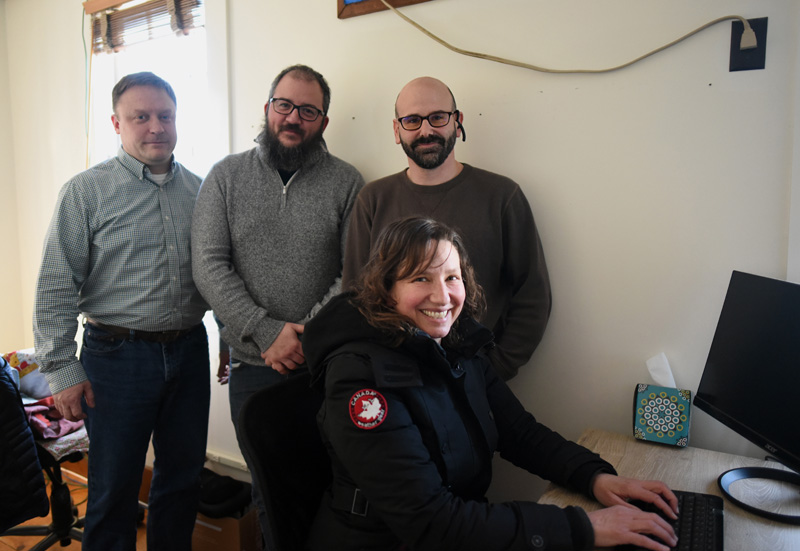 Midcoast CoWork LLC, a coworking space currently in an office above Weatherbird Shops at 72 Courtyard St., Suite 4 in Damariscotta, hopes to expand into a larger space downtown.

Midcoast CoWork was created by members of Buzz Maine, a downtown coworking space, after it closed in June 2018. Coworking refers to the sharing of office space by people who do not work for the same business, but are remote workers or self-employed.

The business touted itself as a “21st-century workplace” and earned accolades, including a Business Enhancement Award from the Damariscotta Region Chamber of Commerce in May 2018, but closed a month later.

“When it closed, we all decided we liked what we were doing, working together, and went looking for a new space,” said Katy Sato-Papagiannis, a graphic designer for the Massachusetts Institute of Technology. “This one seemed to be the best suited for us and our guaranteed group at the time, which has grown.”

“We were all working together already and we wanted to stay together as a group,” Butler, of Newcastle, said. “For some of us, it was necessary to find a spot. A lot of us depend on good internet bandwidth and a place to work.”

The LLC now has around 15 members, many of whom were members of Buzz Maine.

“I have two little children at home,” Mitchell, of Alna, said. “So it’s really important for me to be able to come to a place that’s quiet.”

Withers, of Bremen, said he joined the coworking community because he needs a good internet connection for his work.

“I kind of missed seeing people. I worked from home for almost 10 years,” Butler said. “Now I have work friends.”

“There really is a sense, when you work from home, of isolation, and it does kind of drive you crazy,” Withers said.

The current space has two rooms, with five desks and a large table. It has high-speed internet from Tidewater Telecom Inc., of Nobleboro. Members bring their own computers.

If she does, she hopes to make Midcoast CoWork her own business. The business is currently a partnership between the four founding members, but the group has discussed having Sato-Papagiannis reopen in a new location as the sole owner.

“We support Katy’s vision and want to see it grow,” Butler said.

She wants to keep the business downtown, close to parking, coffee shops, and food.

She hopes that with a larger space, more people could join and summer visitors could have a place to work or hold meetings.

“I think the need is there,” she said. “There are quite a few people who are remote workers who like working with other people, not just from home.”

“I think it can work in this area. I think there are enough people to support a business,” she said.

“It’s a very supportive community,” Mitchell said of the members.

For more information, go to midcoastcowork.com.