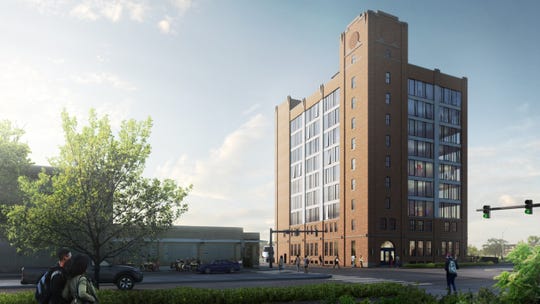 The development, named Chroma, is expected to be complete by the end of the year. (Photo: the Platform)

Detroit — Construction began this month on a $16 million project to transform a long-vacant Milwaukee Junction building known for its rainbow-colored mural into a coworking space and food hall.

The Platform, Detroit-based development group, announced Tuesday the status of its redevelopment of the former cold storage building at 2937-67 E. Grand Blvd.

The development, named Chroma, is expected to be complete by the end of the year.

“It is a project that creates quality space for creatives — from emerging to established practitioners — in a neighborhood with a rich history of industry and creativity,” said Abir Ali, director of design and culture for the Platform, in a statement.

Renderings of the nine-story, 75,000-square-foot building show the addition of large windows on the east and north sides. Developers say the 100-foot-by-125-foot tall rainbow-colored artwork, “Illuminated Mural,” on the building’s west side will be preserved and protected.

“Breathing new life into this building marks the next chapter in the life of the mural,” said artist Katie Craig, who painted the mural on the building in 2009.

In 2016, Craig sued the previous owners who had plans to install windows in the facade, despite an agreement she had with prior owners that it could remain for at least 10 years.

The Platform went under contract to purchase the building in 2017 and agreed in writing that it would not remove the mural.

Grandview Public Market, from West Palm Beach, Florida, will run a 14,000-square-foot public market hall on the first two floors of the building. It will serve as an incubator for local food entrepreneurs and include a full bar with beer, wine and cocktails.

“Grandview will not only be a great place to grab a bite but will help Detroit’s next food industry leaders by eliminating the costs of equipment, build-out and long-term rent obligations that are often barriers that keep so many food entrepreneurs from realizing their dreams,” Grandview founder Chris Vila said.

Beauty Shoppe, a Pittsburgh-based firm, will operate a coworking space in 15,000-square-feet on the seventh and eighth floors. Workspace options include dedicated desks and private offices for small businesses and freelancers.

Vendor space is still available for the remaining floors.

Northville-based inFORM Studio is the architect and Eastpointe-based the Monahan Co. is the contractor.

The lead up to construction has taken two years, according to Dietrich Knoer, president and CEO of the Platform. The project is funded through PNC Bank, Invest Detroit and the Detroit Economic Growth Corp.

The project falls under Opportunity Zone rules that allow investors to reduce or avoid capital gains taxes by investing in designated areas.