Last month, a local chain of coworking venues that sought legislative help had a bill introduced to get the Virginia ABC off its back.

Now, a Scott’s Addition-based menswear brand is hitching a ride on that effort.

Alton Lane, which makes men’s suits, shirts, shoes, pants and accessories, in recent weeks lobbied to have its cause added to pending legislation that was initiated by Richmond-based Gather, which owns several coworking spaces around the region.

The bill first was introduced to create a new type of ABC license that allows coworking spaces to serve alcohol to their members, a service many had been providing until the Virginia ABC cracked down on them.

Alton Lane, which sells mostly custom-made clothing, lobbied to have an amendment added to the bill, creating “bespoke clothier establishment licenses” as a type of ABC license. 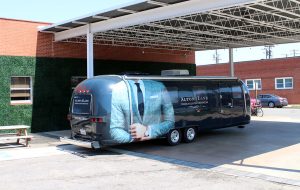 It has offered drinks to customers during their fittings at its Libbie Avenue retail shop, but co-founder Peyton Jenkins said the ABC cracked down on them last year.

“We want to meet our customers where they’re going to be most comfortable. So we designed our spaces for that. Instead of conference tables with swatches everywhere, we have bars and barstools, and we like to be able to serve our customers a range of drinks from alcoholic to non-alcoholic. And in the state of Virginia, that’s not allowed,” Jenkins said.

Alton Lane went to Patrick Cushing of Williams Mullen, who specializes in ABC law, to learn about their options. They found the bill Gather was pushing for and approached Sturtevant to see if a bespoke clothier option could be added.

“Our language is a similar exemption (to Gather’s): people are coming into our place of work, and we don’t want to be a bar or at the center of any sort of nightlife or social gathering. We just want to provide a service to customers. And Glen (Sturtevant) felt it’d be an approvable addition to the bill,” Jenkins said.

The amended bill defines a bespoke clothier as a “retail establishment that offers, by appointment only, custom made apparel and that offers a membership program to customers … where measurements and fittings are performed on-site but apparel is produced offsite and delivered directly to the customer.”

Jenkins said if the bill passes, Alton Lane would create a type of membership program for its Virginia location that customers could pay to join.

“We like to say as a company, we’re all the benefits of a private club. We have private appointments, we work one on one, so we already have that feel,” Jenkins said.

“For customers that wanted to have a glass of wine or a glass of beer during their appointment, then we’d offer some sort of nominal membership fee that would give them the right to have access to that.”

Last week, Sturtevant’s bill was sent to a conference committee, “where they put three senators and three delegates in a room to hash it out,” said Polly White, Gather co-owner.

If the conference committee approves the bill, it’ll head to Gov. Ralph Northam’s desk to be either signed into law or vetoed.

White said she believes the conference committee will meet soon, and Jenkins said he’s confident the legislators will make the right decision. Sturtevant did not respond to calls and emails requesting comment.

The General Assembly will adjourn Feb. 23.

Gather and Alton Lane’s efforts are the latest attempts to loosen ABC regulations.

In this General Assembly session, DeSteph also wrote a bill that would have loosened restrictions on the state’s “45 percent rule,” which requires restaurants to have at least 45 percent of their sales come from food and nonalcoholic drinks.

The latest bill, Senate Bill 773, died in committee. It is at least the third straight year DeSteph has attempted to loosen the ABC regulation.

Last year, the state passed legislation that gives Virginia breweries, wineries and distilleries the option to allow dogs inside their facilities.

The Student Debt Crisis, and the FIRE Movement

Can You Afford to Change Your Career?

Future of Work: How the IoT, AI, and Robotics Can Help Keep Workplaces Clean...

Working Romania goes online | Join us in the Future of...

To Cope with Stress, Try Learning Something New